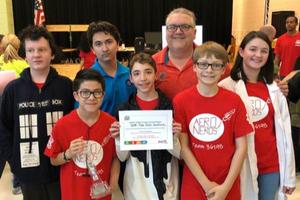 Named the "Qualifier Champions" at the First Lego League Alamo Region competition, the Canyon Middle School team made up of eighth graders advances with an innovative concept.

The First Lego League team called the Aero Nerds at Canyon Middle School is heading to the regional championship on March 24 after taking the top honor in the regional qualifying tournament. The team will compete against more than 60 teams for a chance to advance to the national competition.

This year’s First Lego League theme is Into Orbit, and the Aero Nerds identified and tackled a problem with space travel looking at muscle atrophy and the reduction in bone density of astronauts. The team’s solution is GRASS (Gravity Resistant Astronauts Suite System), using special materials and motors to create tension and resistance during ordinary movements.

Besides the Aero Nerds, CMS had one other team competing called the Aero Botanists which received a third place award for Robot Design but did not advance to the regional tournament.

These teams along with other middle school teams competed in the First Lego League program for fourth through eighth grades as part of FIRST LEGO League which was founded in 1998 by FIRST (For Inspiration & Recognition of Science & Technology) and the LEGO Group. The two joined forces in order to engage young students in science and technology. Today, more than 320,000 students participate in 98 countries in four programs divided into age groups: First Lego League Junior for kinder through fourth grades, First Lego League for fourth through eighth grades, First Tech Challenge for seventh through 12th grades and First Robotics Competition for ninth through 12th grades.

Every year, the challenge includes three parts: the Robot game, the Project and the Core Values. Teams of up to 10 students along with at least two adult coaches participate in the competition by programming an autonomous robot to score points on a themed playing field for the Robot game, develop a solution to a problem which they have identified for the Project while using the First Core Values of discovery, innovation, impact, inclusion, teamwork and fun.