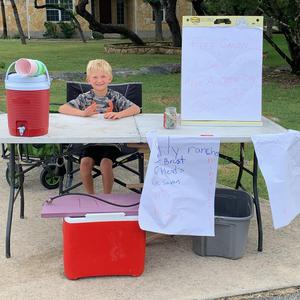 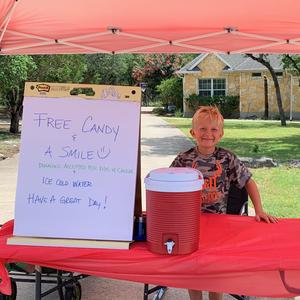 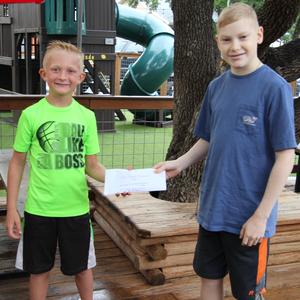 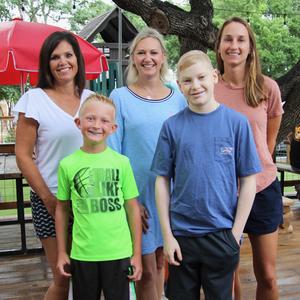 One Comal ISD elementary student made a difference this summer with a little candy, a smile and a big heart. The benefactor just happens to be a foundation whose namesake is also a district student.

July 14, 2021 - When 8-year-old Chase Norwood decided to set up a candy stand in front of his house, he had no idea that it would garner $275 in donations or lead him to choose the Seth Strong Foundation as its beneficiary.

Norwood, who will be a third-grade student at Rahe Bulverde Elementary, is always looking for fun ways to pass his time and is pretty good at entertaining himself, explains his mother, Carrie. She wasn’t surprised one June morning when her highly energetic son with a big heart asked if he could give away candy which she had left-over from a work event.

She watched from a window as he set up a table and chair in front of their house and designed a sign that read, “Free Smiles and Candy!” He started his adventure around 7:30 a.m., and did just what the sign said, handed out candy along with his signature smile. At some point, someone stopped and gave him some money in exchange for his goods, and he ran inside to tell his mom but quickly returned to his post, finishing out his first day around 3:30 p.m.

That’s right, Chase, who is usually not one to sit still, managed his candy stand for eight hours on his first day. Carrie, who is a professional fundraiser, was surprised that Chase stayed engaged for such a long time in the heat of the day. She only got involved to deliver lunch and help create a new sign. She also talked to him about what he wanted to do with his donations which included a $100-dollar bill given by a generous neighbor.

Chase knew immediately what he wanted to do with his donations. He wanted to give them to a charity that helps kids with cancer. Carrie began searching for local charities through the Nextdoor neighborhood site and the Seth Strong Foundation was mentioned several times. She researched it along with others and ultimately gave Chase the opportunity to choose the charity to which he wanted to donate the funds. He chose the Seth Strong Foundation.

Chase spent one more day in front of his house giving away candy and smiles for donations and raised $255. His father, Jeff, added $20 for a total of $275.

“I wanted him to hand the donation to someone with the charity,” said Carrie, who contacted the Foundation. “I knew that would be something Chase would remember instead of just donating the funds through a website.”

On Monday, July 12, after a day at camp, Chase and his dad met the founders of the Seth Strong Foundation, Seth Permenter, his mother, Sarah, and his sister, Abby, along with two board members, Ashley Garrison and Diana Dickson, on the patio of a restaurant.

Seth, 14, shared his cancer story with Chase, who was surprised that the Foundation’s namesake was the person he was giving his donation too, and after hearing his story, Chase told him how sorry he was that this happened to him.

For Seth, who will be a ninth-grade student at Smithson Valley High School in the fall and who was diagnosed with cancer four years ago, giving back to the community is why he and his family helped establish the Seth Strong Foundation in 2018. He was happy to see how Chase was bringing awareness to childhood cancer with his candy drive.

While Seth likes to play golf and Chase likes baseball, the two found common ground with a mutual love for fishing which they hope to do together one day.

-The first day of Chase Norwood’s candy stand in front of his house in June.

-Pictured from left, Chase Norwood, 8, gives $275 in donations from his candy stand to Seth Permenter, 14.