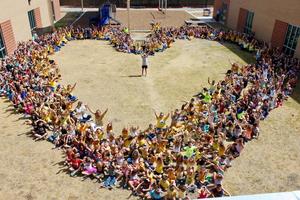 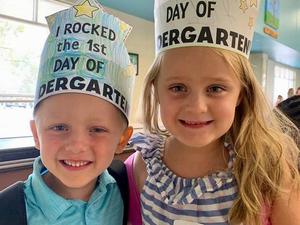 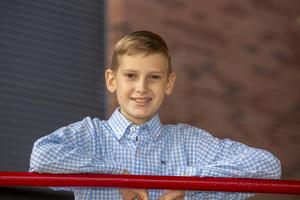 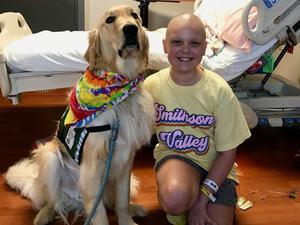 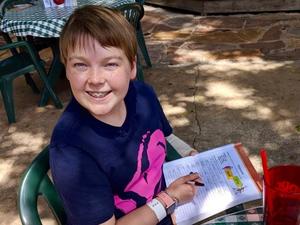 All month, campuses across the district have hosted campaigns to raise not only money, but also awareness of childhood cancer. One of the main reasons the district is so invested in raising awareness is because of students like the five featured here who continue to fight and show amazing courage and strength every day.

Part of raising awareness during the month of September when it comes to childhood cancer is helping those who are fighting personal battles with the disease. Here are a few stories about students and their families in the Comal Independent School District who continue to fight and teach those around them some of the greatest lessons in life.

Jaden Leihsing – Jaden is a kindergarten student at Johnson Ranch Elementary, and he, along with his twin sister, Emma, loves to play sports. Now 5, Jaden was diagnosed with acute lymphoblastic leukemia at the age of 4, just over one year ago. His mother, Kristen Leihsing, an assistant principal at Canyon High School, says that while he currently has restrictions on physical activity, it is hard to keep an active 5-year-old down.

Fitted with a special shirt to protect him, Jaden played soccer on a team with his sister recently, and while he will continue his treatments for the next two years, he also will continue to look for ways he can just be a kid.

Seth Permenter – Seth is a seventh grader at Smithson Valley Middle School who was diagnosed with osteosarcoma, a malignant tumor of the bone, in his left leg when he was in the fourth grade at Bill Brown Elementary. Seth had a recurrence of cancer found in a heart valve and lung which led to a heart valve replacement surgery and chemotherapy. Currently, he is back at school.

Like most 13-year-olds, Seth likes hanging out with his friends, but he also enjoys giving back to other families and kids who are going through what he has gone through. In fact, his family saw a need in their community and established the Seth Strong Foundation in 2018. The Foundation hosts an annual Mother Son Kickball Tournament in May, which is scheduled for Friday, May 8, 2020, at the Bulverde Little League Fields. Proceeds from the tournament benefit local families who may be experiencing a life-threatening illness of a child.

The foundation has donated $30,000 to families who had children diagnosed with an illness in the Smithson Valley area. It also awarded three scholarships to graduating seniors from Smithson Valley High School who had been touched by cancer.

Seth recently shared his story on the KENS 5 Great Day SA morning show where he promoted Methodist Healthcare’s annual Ranch Chic Fashion Show which he participated in this year.

Emma Wolter – Emma, 13, is an eighth-grade student at Church Hill Middle School and was diagnosed with acute lymphoblastic leukemia (ALL) on Dec. 23, 2018. As she completes her “frontline” treatment which ends in October, she looks forward to getting back to the sports she loves including volleyball, swimming and riding horses. Luckily, her miniature horse, Carl, keeps her company at home.

The oldest of four siblings, Emma is hoping to return to school in January, said Jesica Zunker, her mother who previously worked for the district as a teacher’s aide at Oak Creek Elementary.

In fact, OCES honored Emma as its “hero” this month while raising funds for Pennies for Patients, a program sponsored by the Leukemia and Lymphoma Society. The entire campus wore gold Monday, Sept. 23, for its kick-off, and invited Emma to take a picture inside their heart.

Sydney Pavlik – Sydney is a sixth-grade student at Smithson Valley Middle School and was diagnosed with acute myeloid leukemia (AML) this May. She has begun chemotherapy and will receive a bone marrow transplant from her brother, Hunter, who is an eighth grader at SVMS, this week. Sydney has participated in dance for the past two years and looks forward to being a part of the SVMS dance team. The SVMS community has hosted several fund-raising events to help her family including a back-to-school night dinner and most recently, the Meet the Mustangs event where portions of the proceeds from barbecue plates, concessions and a teacher dunking booth were being given to Sydney.

Maureen ‘Mo’ Colligan – Mo, who will soon be 14, was featured a year ago during the district’s Going Gold campaign. Today, an eighth grader at Mountain Valley Middle School, Mo is continuing her treatment for her second cancer diagnosis attending school and getting back to enjoying a normal life, said her father Michael Colligan. In fact, she enjoyed her summer for the first time in years.

Initially diagnosed with Ewing sarcoma in the spring of 2017 while in the fifth grade at Mountain Valley Elementary, Mo, who had finished her treatment the following fall and had returned to school as a sixth grader at MVMS, was diagnosed with B cell acute lymphoblastic leukemia (ALL) after her six-month checkup in May of 2018. She will continue treatment for her leukemia diagnosis until next year at this time, her father explained.

Her MVMS family continues to raise awareness and funds in her honor with all the money raised going to Dell Children’s Blood & Cancer Center in Austin where Mo has received her treatments.

“We take it one day at a time,” her father said. “We are very appreciative of the support we have received from the Comal ISD community and especially the MVMS Principal Dustin Davisson and the teachers and staff.”

While Jaden, Seth, Emma, Sydney and Mo have a cancer diagnosis in common, they also have the encouragement and support of teachers, students and administrators of Comal ISD behind them. Since school is often the touchstone children fighting cancer, their siblings and parents need in order to move forward, this support means the world.

-Emma Wolter, an eighth-grade student at Church Hill Middle School, stands in the middle of a heart formed by students and teachers of Oak Creek Elementary School, where she was honored as their "hero" for Childhood Cancer Awareness month. Wolter is fighting leukemia.

-Jaden and Emma Leihsing are twins who started kindergarten this year at Johnson Ranch Elementary. Emma is right by her brother's side as he battles leukemia.

-Seth Permenter is a seventh-grade student at Smithson Valley Middle School, and his cancer diagnosis almost four years ago has prompted he and his family to start their own non-profit organization, the Seth Strong Foundation, which helps local children and their families who receive a cancer diagnosis.