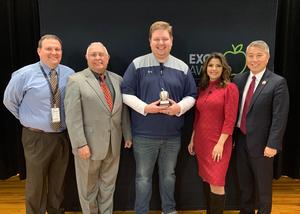 Almost one year ago this month, Spring Branch Middle School teacher and coach, Tyler Clements, was named our Secondary District Teacher of the Year. On February 11, he was surprised with the KENS 5 Credit Human EXCEL Award for Comal ISD. Congratulations Coach Clements for this amazing honor!

A Spring Branch Middle School history teacher and coach was surprised Tuesday when he was awarded the KENS 5 Credit Human EXCEL Award, which recognizes local public-school teachers for their innovative practices and the differences they make in the classroom and beyond.

Tyler Clements, who has been teaching for six years, was led to the cafeteria where both previous and current students of his were quietly pretending to take an exam. It didn’t click that the surprise was for him until Sarah Forgany, a KENS 5 news anchor, stepped out from behind the stage’s curtain and made the announcement.

“The principal knocked on my classroom door and very seriously told me to come with him to the cafeteria,” explained Clements to his cheering students. “I had no idea what was happening, I am incredibly surprised.”

The popular teacher followed in the footsteps of his parents when he decided to become an educator, and almost one year ago, he was named Comal ISD’s Secondary District Teacher of the Year. On Tuesday, his parents and wife, who is also a teacher, were on hand for the latest accolade and surprise.

Annually, one teacher from each of the 19 area school districts is honored with a $1,000 check from Credit Human and is featured on KENS 5. Clements will be featured on the news station at 6 a.m. and 6 p.m. Thursday, Feb. 13. In addition, his feature story is  available here.