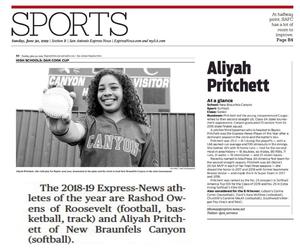 Before she officially begins her college softball career, Aliyah Pritchett received one more honor - the San Antonio Express-News Player of the Year award.

This is just the latest honor for Aliyah Pritchett who recently completed her high school softball career at Canyon High with quite a list of awards and accolades.

“I didn’t know about the athlete of the year honor until I spoke with my Dad on Sunday and when my coach sent out the news,” said Pritchett in a telephone interview from Colorado where she was playing with her select softball team in her final tournament before heading to college. Pritchett committed to play college ball at Baylor University as a high school freshman and signed her letter of intent this past November.

A standout player who helped lead her team to its second straight UIL Class 6A state tournament bid also was named recently to the MaxPreps All-American first team for the second straight season and earned a spot on the Texas Girls Coaches Association (TGCA) all-state team.

Additionally, Pritchett was named the All-District 26-6A MVP for a third year in a row and ranked the No. 23 prospect in Softball America’s Top 100 for the Class of 2019 as well as No. 25 in Extra Inning Softball’s Elite 100.

A natural athlete, Pritchett has participated in many sports including soccer and basketball, but it was softball that kept her interest. She’s been playing since she was 3.

“Softball has taught me so much,” she said. “I just have to focus on what’s on the field; I’ve met many people; it’s helped me become mentally stronger; and it has shown me how big a family can be.”

Besides playing college ball at Baylor in the fall, Pritchett has her eye on a bigger goal as well, playing in the Olympics.

To any young athletes who are wondering how she has been successful in her sport, Pritchett gives this advice.

“Don’t focus on yourself. You’re playing for 12 other girls on that field, so it’s not about you.”

As to what motivates her to continue to push herself as a student and an athlete, she said, her family and her grandmother, who passed away in January.

“These awards make me happy,” Pritchett said, “because they mean that I haven’t let my family down or my team and coaches too.”

For this student athlete, it’s just the opposite. She has made everyone proud including her parents, Betty Joe and Gregory Binford.