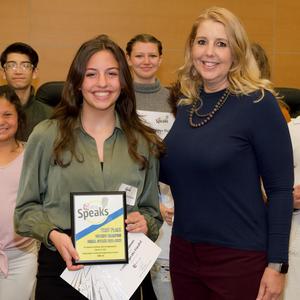 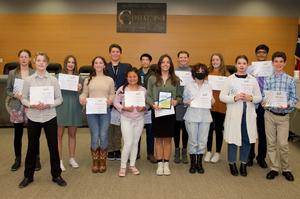 This year's Comal Speaks champion knows what it's like to overcome, to fight and to be honest with not only yourself but with family and friends.

March 21, 2022 - For the second year in a row, a student from Church Hill Middle School was named the champion of Comal ISD’s annual Comal Speaks competition. This year marked the fifth anniversary of the program which challenges middle school students to prepare and present speeches to judges on topics related to Comal Commitment character traits.

This year’s district champion is Gabriella ‘Gigi’ Goossens, an eighth-grade student from CHMS. She chose to speak about how honesty affects her life. In her winning response, she shared a personal struggle which she had to overcome.

Goossens had back surgery two years ago due to scoliosis, and she talked about how this experience affected her and how she had to be honest with herself, her parents and her friends, in order to get through it.

“In the end, I realized there is so much more to me than my physical self. Through patience and time, I became better than I was before,” says Goossens, who is now back to playing soccer, plays the cello in the orchestra and enjoys reading, science and debate.

This wasn’t the first time she had competed at the district level for her interpersonal skills, however. When she was in the fourth grade at Hoffmann Lane Elementary, Goossens came in second place in the district’s Comal Shake competition.

In fact, Comal Speaks began as a way to continue the interest students had in the Comal Shake competition which begins in elementary schools. Many of the students who compete in Comal Speaks, competed as elementary students in the Shake contest and are anxious to continue to use the character traits in middle school.