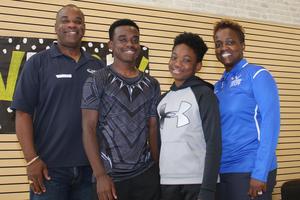 For Vicki and Gaspar Dominguez, both Air Force veterans who served 22 years, being honored with a room full of fellow military colleagues is almost overwhelming.

For Vicki and Gaspar Dominguez, both Air Force veterans who served 22 years, being honored with a room full of fellow military colleagues is almost overwhelming.

The Dominguez family includes Alexander, 8, a third grader at Kinder Ranch Elementary; Juliana, 11, a sixth grader at Pieper Ranch Middle School (PRMS) and Jasmin, 13, an eighth grader at PRMS who performed during with the school’s orchestra during its Friday celebration.

“I am proud that our kids are being taught the importance of how to respect our military men and women and our veterans,” Jileene said about the Veterans Day celebrations she attended on Friday. “It means a lot to us that our schools are instilling the same values that we instill in our children at home.”

PRMS seventh grader Mia Aranda gave her Aunt Victoria Saldierna a big hug when she arrived at the school’s Veterans Day celebration Friday. Saldierna woke up at 2 a.m. in Dallas in order to be at the celebration on time. She is currently serving in the Texas Army National Guard in Grand Prairie, Texas. She has completed two tours and has served for 11 years.

“I wanted her to be here,” Aranda said, “because this is her day, and I wanted to honor her along with all the other military family members at our school.”

With 25 nieces and nephews in her family, Saldierna said she would have made the trip for any of them.