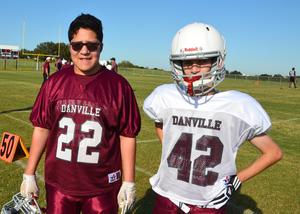 Danville Middle School Head Athletic Coordinator and Football Coach Mike Broaddus made a play that would touch the heart of every fan in the stands at the last home game on October 10.

Danville Middle School Head Athletic Coordinator and Football Coach Mike Broaddus made a play that would touch the heart of every fan in the stands at the last home game on October 10. He geared up his athletic managers Gage Dunivan, a 7th

Broaddus has a student athletic manager for his 7th and 8th grade football teams, both with special needs, and according to Dunivan and Driskell’s moms, these roles have made all the difference for their sons.

“Coach Broaddus is doing things we’ve never seen done before,” said Devin Dunivan. “He’s teaching these kids to be accepting of those who are different, and my son has been completely accepted by the football boys.”

“The team has gone out of their way to make my son feel like a part of it,” said Driskell. “These other boys have taken Gage and Michael in, and I think that goes back to what the coaching staff is doing.”

Dunivan continued to explain how Broaddus has made a positive impact on her son.

“My son would never drink water,” said Dunivan, “after Coach Broaddus told his boys about the importance of eating right and staying hydrated in order to play ball, my son is now drinking water every day.”

Dunivan also emphasized other skills Broaddus has been teaching his students outside of just football; responsibility, respect, courtesy and confidence.

“On Fridays after lunch, Coach Broaddus has the football boys help the custodians clean up the cafeteria,” said Dunivan. “It’s the little things he does like this that teach our kids so much.”

Coach Broaddus is a Canyon High School alumni and has been coaching for Comal ISD for nine years.

“I love being a football coach because it’s a job that’s so much more than just teaching Xs and Os” said Coach Broaddus, “it’s about teaching boys how to behave and act like young men. It’s about teaching hard work, dedication and teamwork.”

Coach Broaddus continued by thanking those who helped make this game so special.

“My team and I would like to thank Coach (Edwin) Derrich and the Spring Branch Middle School coaching staff for making this all possible. Their athletes are classy young men,” said Broaddus. “We also appreciate the continuous support from our fans, student section, staff and administrative team.”