Board of Trustees Recognizes 97 State Qualifiers 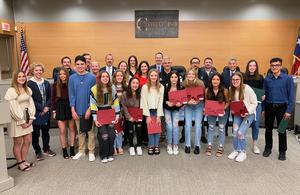 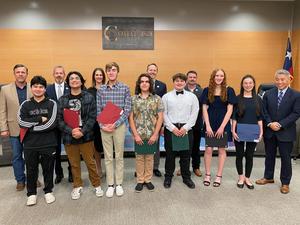 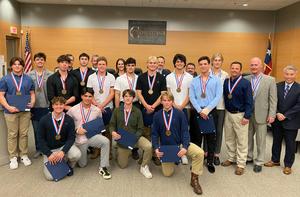 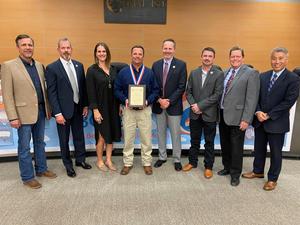 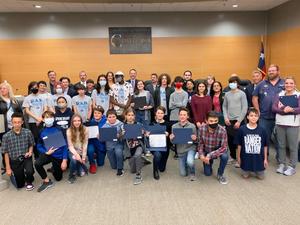 Students from across the district were recognized by the Comal ISD Board of Trustees for the work, practice and talent each displayed in order to qualify for a state competition in robotics, music, cross country and baseball.

January 28, 2022 - The Comal Independent School District Board of Trustees honored 97 students during its regular board meeting Thursday. These students were recognized for being State qualifiers in their extra-curricular activities, representing their campuses at the highest level.

The next group of students recognized at the meeting were seven high school students who earned the title of All-State Musician through a series of auditions. From Canyon High School, three students earned 5A All-State Band Member titles under the direction of Band Director Steve Vaden. They include Aidan Khus, percussion; Ryan Lopez, percussion; and Kolby Taylor, E-flat clarinet.

From SVHS, under the direction of Director Richard Helsley, Ellie Kennedy received All-State Orchestra honors and First Chair violin, sitting Concert Mistress. This is quite an achievement. Kennedy is the best in the state.

Seven individual cross country athletes qualified for the state meet including two from CLHS; Cadence Patterson and Aleksandur Villavicencio, coached by Cody Schroeder and Chris San Miguel: two from DHS; Maddie Reagan and Rylee Reisdorph, coached by Kristen Kirsch: two from PHS; Noah Conner and Joaquin Flores, who was the top freshman finisher at Region 4-4A Championships and the fifth freshman in the State 4-4A Championships, coached by Jody Hawkins: and Schaefer Robertson from SVHS, coached by Trenton Hall.

The final recognition of the evening was for the 2021 SVHS baseball team, coached by Chad Koehl and Lane Bowman. This Ranger team ended last year’s season during the summer as a State Semi-Finalist with a record of 35 wins and 6 losses along with many individual all-state honors.

In addition, Coach Koehl was named the 2021 Coach of the Year by the San Antonio Area Baseball Coaches Association this fall.

Before ending the recognitions for the evening, a special video was played for the trustees thanking them for all they do for the district’s students and staff. January is School Board Recognition Month. View the video here.

-Cross Country state qualifiers were honored during the January Comal ISD Board of Trustees meeting, Jan. 27.

-Seven All-State Musician honorees were recognized during the January Comal ISD Board of Trustees meeting, Jan. 27.

-The 2021 Smithson Valley High School Baseball team was recognized during the January Comal ISD Board of Trustees meeting, Jan. 27.

-Five robotics teams which qualified for state competition Lanewere recognized during the January Comal ISD Board of Trustees meeting, Jan. 27.